For local residents, the Oakland bypass is a somewhat controversial subject. It was previously proposed in the 1990s. Officials are considering the Oakland bypass again. It would re-route traffic to avoid the historic downtown area. The project was in limbo for years due to state funding issues. 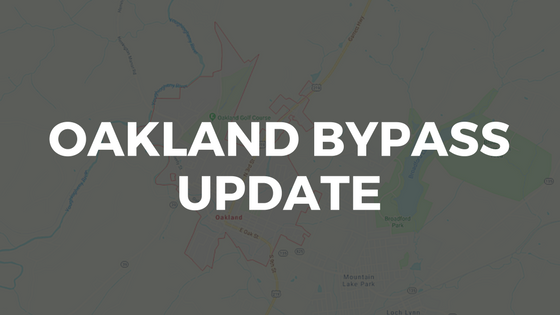 About the oakland bypass

The Maryland State Highway Administration and Maryland Department of Transportation (MDOT) have estimated the construction cost at $53 million. A 2.4 mile stretch of highway would re-route traffic from the downtown area to reduce congestion.

It would relocate US 219 from north of Oakland to MD 135. It would go behind Walmart and Garrett Regional Medical Center, cross Memorial Drive near the intersection of Harvey Winters Drive, crossing Dennett Road, Eighth Street, and East Green Street. Then, it would connect with Ninth Street, ending at the current U.S. 219 and Md. 135 intersection near Burger King. A round-about is included in the plans.

Proponents cite safety and a decrease in traffic volume as reasons for the Oakland bypass. It could also boost economic development outside of town. The Garrett County Department of Planning and Land Management’s main priorities are properly directing truck traffic away from Oakland’s downtown.

In recent years, great effort has gone into revitalizing Oakland’s downtown. The Greater Oakland Business Association (GOBA) has been trying to bring more traffic to the town. Because they want to stimulate economic growth and property values, this project may counter those initiatives. The group Engage Mountain Maryland points out that studies show that towns with populations under 3,000 often suffer economic downturns following construction of a bypass. They cite local examples of these impacts like Friendsville and Hancock.

The debate about the Oakland bypass continues. The Oakland Mayor and Town Council are in support. Both sides have presented their cases at recent meetings. Officials must decide if moving forward with a bypass serves in
the best interests of businesses, merchants and the economy.